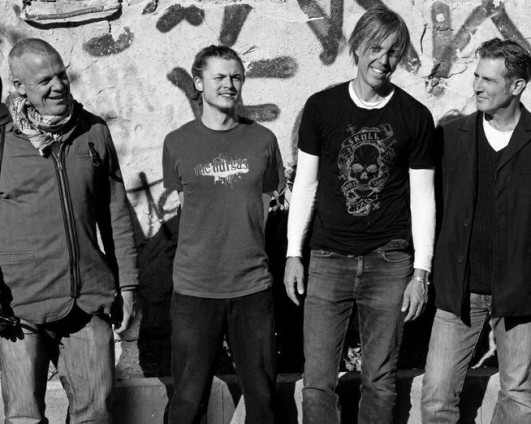 Created by brothers Benji and Christopher Simmersbach, the same guys who were international rock icons with their band A Subtle Plague, The Durgas really shake up the rock’n’roll scene. Their vision of adding African and eastern European folk elements and authentic reggae vibes to the mix is a pioneering move that brings cultures and music together in a pleasant, yet badass combo.

The two brothers were born in Bavaria, Germany, but were raised in Tanzania, Thailand, Mali, Senegal, Italy and the United States. This eclectic mix of locations can be heard reflected in their music, providing the listener with a great wealth of different types of magical melodies.

Even the members of the band reflect this multicultural take on music and life; the band is made up of quite an international crowd. Katy J. Arnovick from the U.S. provides the group with her vocal and bass talents; Alex Czerny, of German and U.S. origins, plays the piano, while Gábor Török from Hungary sets the beat from behind the drums. Benji is on the guitar and vocals and Christopher is lead guitarist.

As well as touring the world’s hip music spots, The Durgas also aim to deliver their intercontinental music to lesser known venues and locations, too. For instance, in 2003, they were the first group to play as a part of the United Nations’ peace and reunification initiative in Mitrovica, Kosovo after the Balkan wars. One year later, they participated in the 15th International AIDS/HIV Conference in Bangkok and gave shows in AIDS hospitals and orphanages. In 2007, they spent a significant amount of time touring in Asia, where they performed for the children of migrant workers (Mumbai and India,) then playing for families in Sri Lanka who lost their homes due to the Tsunami. They also brought their wonderful music to in Thailand at the Saphan Jai festival and to Burmese refugees living in camps on the Thai border.

Thanks to these tremendous experiences, see for themselves how music affects people so positively, they decided to start their own foundation: Music In Action. This alliance is supported by the United States Campaign for Burma, Save the Children United Kingdom, WeltKinderLachen (a German children’s foundation,) Jack Healy (Human Rights Activist) and Michael Franti of Spearhead.

The band’s music can be heard on numerous movie soundtracks, such as Hotel Sahara and Soul Of A Century (a movie that has been awarded many international accolades.) In the last couple of years, they were asked to compose the OST for Into The Current, a documentary centered on Human Rights.

Their first album, Back To The Start, was released in 2008 by Berlin-based Cannery Row Records. It was mixed by Boris Wilsdorf, the famous producer of the renowned German band Einstürzende Neubaten and featured guest vocalist Chuck Prophet.

The band’s latest album, Burma, was made in Berlin in 2008, and then released by the band in 2010. The soundtrack was produced by Noa Winter Lazarus (The Rolling Stones, Pink Floyd) in Los Angeles and Jim Fairchild is featured in two songs.

Quoting from The Durgas’ Official Website, Burma is “the sort of unapologetic, defiantly global music that is intended to speak to people across all borders and nationalities.”

Check them out at www.thedurgas.com!